‘A Nordic composer par excellence’
Conrad Wilson
from a new monograph on John McLeod and his music which can be downloaded at:
http://bit.ly/weJVfW

For over 40 years John McLeod has been at the forefront of contemporary Scottish music and is still one of the UK’s busiest and most prolific composers. Born and educated in Aberdeen, he has been resident in Edinburgh since 1970. He first studied clarinet at the Royal Academy of Music, London with Jack Brymer, Reginald Kell and Gervase de Peyer, but later changed direction and became a composition pupil of Sir Lennox Berkeley. Subsequently he came under the influence of Polish composer Witold Lutoslawski who became a mentor. Conducting studies were undertaken with Sir Adrian Boult.

John McLeod’s early success dates from 1979 when he won the prestigious Guinness Prize for his symphonic song-cycle Lieder der Jugend premiered by the tenor Raimund Gilvan and the RSNO and then performed many times in the UK and in Europe. In 1989 he was elected a Fellow of the RAM and in 2005 and 2010 was nominated for an Ivors British Composer Award. In 2014 he was presented with the Gold Badge of the Ivors Academy. Renowned also as a teacher, John was Director of Music at Merchiston Castle School, Edinburgh for eleven years before holding Lectureships at the RSAMD, RAM and Edinburgh Napier University. Latterly he was Head of Composing for Film and TV at the London College of Music (University of West London) and the Ida Carroll Research Fellow at the Royal Northern College of Music where he specialised in the works of Messiaen, Boulez and Birtwistle.

In June 2016 he was appointed CBE in the Queen’s Birthday Honours and in 2019 the University of Aberdeen conferred on him the honorary degree of Doctor of Music.

McLeod’s brilliantly coloured orchestral and vocal music has been commissioned, performed and recorded in many countries by leading orchestras including the Philharmonia Orchestra, the Halle Orchestra, the RSNO, the SCO (who made McLeod their Associate Composer from 1980-82), the Orchestra of the Staatstheater, Saarbrücken and the Nashville Symphony (USA). The BBC SSO has broadcast 12 of his major orchestral works over the years and in 2015 the National Youth Orchestra of Scotland achieved the 22nd performance of a McLeod work by featuring his Piano Concerto (conducted by the composer and with James Willshire as soloist) in concerts in Glasgow and Dundee. In 1994 he travelled to Poland to conduct the Polish Radio and TV Symphony Orchestra of Krakow in a CD of his orchestral music entitled Visions from the North.

His music has also been featured at international festivals including the London Proms, Edinburgh, Aldeburgh, City of London, Canterbury, Perth, Aberdeen’s ‘Sound’ Festival and St Magnus (Orkney). Most of his works have also been heard on BBC Radio 3, Classic FM, BBC TV and Channel 4.

McLeod’s compositions cover most musical genres – orchestral (including concertos for piano, percussion, clarinet, guitar, viola and three symphonic song-cycles), choral works, church music, songs, instrumental and chamber music as well as scores for film and TV. Described by The Scotsman as ‘a major force in contemporary Scottish music’, McLeod is the subject of a new article by Francis Morris in the latest Grove Dictionary of Music and Musicians.

In the past few years his output and performances have increased dramatically, culminating in 2014 when his music was heard at the St. Magnus and Aldeburgh Festivals as well as at the BBC Proms where he scored a big personal success with the London premiere of The Sun Dances played by the BBC Scottish Symphony Orchestra conducted by Donald Runnicles. Also in 2014 pianist Murray McLachlan commissioned and performed McLeod’s latest Piano Sonata No.5 and gave over 30 performances of it all over the UK and in France, Greece, Poland, Sweden, Australia and the Canary Islands.

In January 2015 the Scottish Chamber Orchestra, under Joseph Swensen, gave three performances of his latest orchestral work Out of the Silence in Perth, Glasgow and Edinburgh. 2015 also saw the release, to critical acclaim, of Moments in Time – a major new CD of McLeod’s chamber music by the award – winning Delphian label and played by the outstanding Red Note Ensemble.

Energetic and active in his eighties, McLeod continues to enjoy a resurgence and interest in his works with a flurry of new commissions and important performances.There have been new Delphian recordings including a high profile album of four orchestral works with the RSNO and Dame Evelyn Glennie, plus a recording on Métier of the complete piano music by Murray and Rose McLachlan. His latest commission – a Viola Concerto (Nordic Fire) for Jane Atkins, Joseph Swesen and the SCO received unanimous praise from audiences and critics alike after its premiere in October 2018. 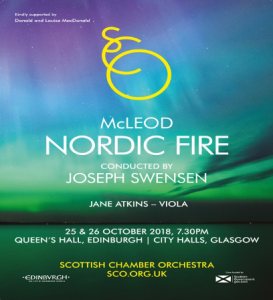 For information on John McLeod and his work please refer to the following publications:

What the critics say:

The Sun Dances (at the BBC Proms 2014) ‘A very fine score, wonderfully, surely orchestrated and engrossing from first bar to last’ Musical Opinion

The Song of Dionysius ‘music with colour and energy, both imaginative and idiomatic’ The Times