For purchase of all music, scores and hire of parts please enquire at
www.tutti.co.uk, www.scottishmusiccentre.com, griffin.music@btinternet.com
or use the enquiry link in the Contact and Links section of the website.

ORCHESTRAL  (with or without soloists)

SYMPHONIES OF STONE AND WATER (2000) 27′
for solo piano, 3 saxophones, 3 trumpets, 3 trombones and percussion
Commissioned by Edinburgh Contemporary Arts Trust (ECAT)
Premiere:   12 February 2001, Queen’s Hall, Edinburgh
Ananda Sukarlan (piano) and ECAT Ensemble conducted by James Wood
‘The voice of a composer at the height of his craft speaking lucidly.’ The Scotsman
‘McLeod’s beautifully structured nine-movement piece . . . some of the most magical effects ever produced by this prolific composer.’ The Herald

SONGS FROM THE SMALL ZONE (1989) 20′
Poems by Irina Ratushinskaya translated into English by David McDuff
Solo soprano, chamber choir and piano
Commissioned by The John Currie Singers
Premiere: 5 March 1989, Royal Scottish Academy of Music and Drama
Irene Drummond (soprano), Peter Seivewright (piano), The John Currie Singers conducted by John Pryce-Jones
‘The poems speak of an enclosed world, of privation of suffering, of fear, and upon them McLeod has unleashed some of his most challenging composition and uncompromising inspiration. He has plunged beneath the surface of the poems, releasing the poignancy and the humanity which lie beneath the chilly and fierce upper layer of the texts. The work is powered by an accelerating momentum that is impossible to resist’ The Herald

for clarinet and piano (with pre-recorded tape)
Premiere: 2 June 1974, MacRobert Centre, University of Stirling
Keith Pearson (clarinet) and Edward Harper (piano)
‘With its evocative tape of lazy female laughter and rolling surf, to which the clarinet responds with bubbling phrases of merriment, Messiaen-like bird-cries and the siren call from Bartok’s Miraculous Mandarin, it is that rare thing in any age – a genuinely sexy piece of music’ The Musical Times

FETES GALANTES (1991) 18′
Hommage a Couperin
for 2 violins, cello and harpsichord
Commissioned by The Kist of Musick
Premiere: 11 June 1991, The Canongate Church, Edinburgh
The Kist of Musick
‘Mcleod’s quartet is full of subtle textures and colours and well-crafted into seven miniature musical portraits’ The Scotsman

SMALL PLEASURES (1992) 12′
Variations on a theme of Benjamin Britten
for oboe, clarinet and bassoon
Commissioned by The London Wind Trio

for violin, clarinet, cello and piano
Commissioned by The Hebrides Ensemble
Premiere: 16 May 2002, St mary’s Episcopal Cathedral, Glasgow
‘John McLeod’s latest work is remarkable for the urgency and violence of its argument.  Silence is crowded out of the opening Metamorphosis by swathes of virtuosic writing, and the spectres of Messiaen’s Quartet for the End of Time and McLeod’s magnificent Third Piano Sonata stalk through the score . . . the Threnody, which draws the work to a close with exquisite tenderness, brings solace where there once was pain.’ The Daily Telegraph

‘Written around the time of September 11 last year, it is not surprisingly full of anger, driving forward movement and great slashes of sound. Passionate and effective, eventually the anger evaporates into a gentler lament which itself transforms into the mystical stillness of Messiaen’s Quartet for the End of Time.’  The Times
‘A moment in Time is a strong, fierce, ultimately haunting memorial to the events of September 11.’  The Herald

THREE INTERLUDES (2003) 6′
from the film Another Time, Another Place
Arranged for violin and piano by Margaret Murray McLeod

CHINESE WHISPERS (2005) 16′
Nominated for a British Composer Award 2005
for 2 trumpets, horn, trombone and tuba
Commissioned by Fine Arts Brass
Premiere: 12 March 2005, Stranraer Music Club
‘Inspired by a recent visit to China, it rejoiced in the composer’s experiences there and found a musical format for them which brilliantly exploited the the voices of the instruments and the personality of the players. Witty and imaginative music’. The Herald

Commissioned by Aberdeen University to mark its 500th anniversary
Premiere: 7 December 1995, Mitchell Hall, University of Aberdeen
Murray McLachlan (piano)
‘McLeod has fashioned a monumental edifice for his Third Piano Sonata – a massive structure with hugely dramatic momentum and a simmering intensity that bubbles, boils and erupts with volcanic force’ The Herald

THREE INTERLUDES (1997) 5′
from the film Another Time, Another Place

THREE PROTEST PIECES (1992 rev 1998) 7′
Premiere: 9 February 1999, Reld Concert Hall, University of Edinburgh
Murray McLachlan (piano)
‘There are flashes of angry modernism, but the expression, the unfolding in long, singing lines, are rooted in late Romanticism. It all emerges whole, and with considerable dark eloquence’ The Scotsman

PIANO SONATA NO. 4  (2006) 18′
Commissioned by Sam Haywood
Premiere: 16 November 2006, Sound Festival, Mitchell Hall, University of Aberdeen
Sam Haywood (piano)
‘With Bartok-like stabbing chords and frenzied runs, Sam Haywood drove the first movement forward at full tilt. The more relaxed central movement had a certain opalescent glow about it before the fires flared up more brightly than ever in the Finale. There was so much going on in this music that it seemed to be over before one could draw breath. No chance of ever being bored by this music’. Alan Cooper (Critic’s Review)

THE SEVEN SACRAMENTS OF POUSSIN (1992) 35′
Commissioned by Philip Sawyer
Premiere: 2 March 1992, Greyfriars Kirk, Edinburgh
Philip Sawyer (organ)
‘McLeod presents chiming and meditative chords that are ruled by colour rather than structure, and his bursts of melody are mere rhythmic twitches, more like textures than tunes. These features resemble Messiaen, but the Scot’s music is colder, grimmer and greyer, more suggestive of Aberdeen than Avignon’ The Independent
‘Overall, the work possessed a strong luminosity and spatial feel which gave the sensual tones of the organ room to breathe’ The Scotsman

SONGS and SONG-CYCLES (with piano and other instruments)

PEACOCKS WITH A HUNDRED EYES (1984) 17′
Poems by Shelley and Christina Rossetti
for counter-tenor or mezzo-soprano or baritone and piano
Commissioned by James Littlejohn
Premiere: 8 May 1984, Wigmore Hall, London
Ashley Stafford (counter-tenor) and Penelope Smith (piano)
‘Strongly illustrated music with evocative use of a lyrical line highlighted by dramatic florid passages’ The Daily Telegraph

CHANSONS DE LA NUIT ET DU BROUILLARD (1992) 12′
Poems by Jean Cayrol
for soprano and piano
Premiere: 2 March 1992, Greyfriars Kirk, Edinburgh
Jane Manning (soprano) and Dominic Saunders (piano)
‘You were conscious of a seriousness that made no compromises, a mixture of French colour and German severity’The Independent

THE WHITE FLAME (1994) 13′
Texts by J.B.Priestley
for baritone and piano
Commissioned by the Trustees of the Priestley Estate to commemorate his centenary
Premiere: 12 September 1994, Bellevue School, Bradford
John Hearne (baritone) and Robert Howie (piano) 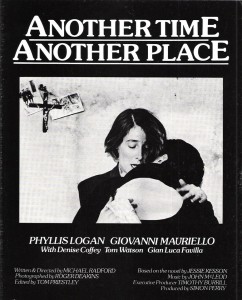 A VIEW FROM A WINDOW (1986)
Feature
Director: Suri Krishnamma
BBC 2